Can we stop with these non-gaming gaming laptops? 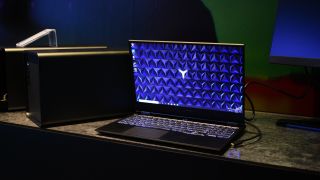 At CES 2020, Lenovo announced the Legion Y740S, a gaming laptop which..doesn’t come with discrete graphics. Let that sink in. In order to get this machine playing games, Lenovo is asking that you fork over an extra $249 (about ₤190, AU$360) for an external graphics box, then slot in a desktop graphics card that can cost plenty more on its own.

On its own, this laptop is good for most workloads, but the integrated graphics would chug on games, making its marketed use-case essentially a no-go. So, what’s going on here?

Lenovo is definitely not the first

Anyone that follows the computing industry as close as we do will automatically think of the Razer Blade Stealth – a thin and light Ultrabrook-class laptop from Razer that’s marketed to gamers. Up until IFA 2019, the Blade Stealth has been stuck on integrated graphics just like the Lenovo Y740S.

The Razer Blade Stealth has always floundered in gaming tests until you pick up a Razer Core X, which is hundreds of dollars on its own, before you factor in the cost of the actual graphics card.

Luckily at IFA 2019, Razer announced its new Blade Stealth, packed with a GTX 1650 graphics card. This GPU is admittedly not the most powerful in the world, but its still good enough to run pretty much any game at 1080p with medium settings. To this day, that new Razer Blade Stealth stands out in the gaming scene because it’s so small and can still play games with a dedicated GPU.

In essence, it’s not a half-measure.

The rise of the external GPUs

Don’t get us wrong, we think external GPUs are an awesome solution for anyone that has an ultraportable laptop and wants to get some gaming done at home. But, while this may be a nice bonus for anyone with an XPS 13 and a gaming habit at home, those laptops are never marketed as gaming laptops.

These devices are also really great if you’re a creative professional. The use case we think of is someone that needs a thin and light laptop to carry between home and the office, with an external graphics card to boost productivity at the office.

Both of these solutions are valid but, again, are catered to folks that know what they’re getting into.

The Lenovo Legion Y740S is a 15-inch laptop packed with 10th-generation Intel Core H-Series processors, up to 32GB of RAM and a 1TB SSD. If this laptop wasn’t branded as a gaming machine, this would be an amazing configuration. These specs are great for anyone that needs to get work done on the road, especially since it weighs just 4.18 lbs (1.9kg).

Lenovo tells us this is the point: this laptop is for gamers that want that kind of power but in a package that isn’t so hard on your back. However, there are laptops like the Razer Blade 15 with a similar screen size and just weighs 4.63lbs (2.1 kg). It’s definitely heavier, but not so much that you’re likely to notice it in your backpack.

Essentially, this laptop starts at $1,099 (about ₤860, AU$1,590), which isn’t a terrible price, to be sure. It’s definitely less expensive than the Razer Blade, to be sure. However, if you want the laptop to have the same capabilities in games and creative applications, you have to take into consideration the price of the Lenovo BoostStation and a new graphics card. You could very well end up paying $1,747 (about ₤1,330, AU$2,540) for the Lenovo Legion Y740S with the entry-level processor, RAM and storage options when you take the price of the eGPU and an Nvidia GeForce RTX 2060 Super into consideration.

Or, you could just pay $1,799 (about ₤1,370, AU$2,600) for a Razer Blade with a better CPU and you’ll be able to actually play your games on the go without having to compromise. We don’t know about you, but this isn’t a compromise we’d be willing to make.