‘Fashion industry’s pollution made me cry’ 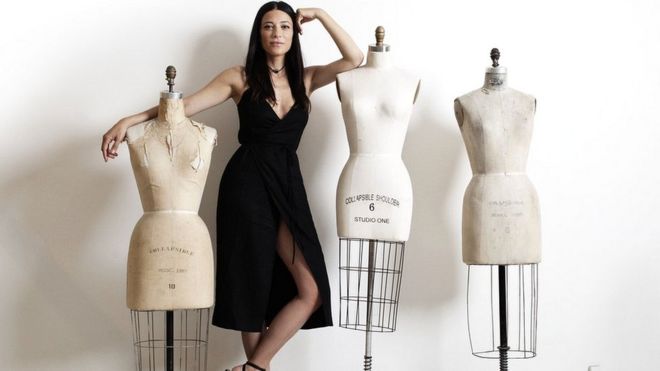 The BBC’s weekly The Boss series profiles different business leaders from around the world. This week we speak to Yael Aflalo, chief executive and founder of fashion brand Reformation.

Yael Aflalo was on a business trip in China when her idea for a sustainable fashion label really took off.

The Californian-based designer had already started a shop selling repurposed vintage dresses when she went on that trip almost 10 years ago, and was struck by how much pollution was involved in the making of clothes.

“I was crying and felt sad about the pollution caused by the fashion industry,” she says. “I could see that organic food was on the rise and I thought there needed to be sustainability option in fashion, so I set about to build that business.”

It gave her the drive to turn her single shop into the Reformation fashion label that now counts singer Rihanna, actress and businesswoman Jessica Alba and Meghan, Duchess of Sussex, as fans of its designs. These are based on eco-friendly fabrics and include leftovers destined for landfill. Annual sales are said to exceed $150m (£112m) this year.

Yael believes she was destined to set up her own company, following in the footsteps of her parents who also ran their own clothing store.

“My whole family are entrepreneurs, and so, actually for me, starting my own business felt more natural than getting a job,” says the fast-speaking south Californian, who has a two-year-old daughter with husband and Reformation creative director Ludvig Frossen.

At 21, (she’s now 41) she started Ya-Ya, a contemporary fashion wholesale label, after a stint as a model. “I actually, like, walked into a store and said ‘do you want to buy this skirt?’ and they bought 40 of them and then 40 turned into 120.”

When she secured bigger orders she would borrow money from family members. “That would keep me going for a month and then later I’d go to the banks.”

The label later boasted an impressive range of stockists including Browns in London, and Barneys and Nordstrom in the US. But after a decade she closed it after it had accumulated debts of a “few million dollars”.

To “figure out” how to salvage the situation Yael says she “did a lot of meditating and soul searching but knew I’d get through this and it would be fine”.

To clear the debts she launched several different businesses including a vintage store and a private label for clothing retailer Urban Outfitters. That private label also helped generate cash to set up Reformation in 2009 following that trip to China.

During the early Reformation days, Los Angeles-based Yael says one of her greatest hurdles was trying to find a manufacturer willing to create small amounts of product.

“Nobody would make my clothes and I was sick if it. Instead I hired a cutter and sewer and made them in LA.”

Fast forward to 2019 and the brand is sold via its website and 18 stores in the US, Canada and UK – where it has one shop in London’s Notting Hill – and employs more than 500 people. It also sells wholesale, for instance via Selfridges, Farfetch and Net-a-Porter.

Sustainability runs through the core of the company, which it tracks and publishes in regular reports. “We set out to create a conscious lifestyle brand where ‘green’ fashion didn’t mean compromising style,” she says.

The company says it has been carbon neutral since 2015, Reformation’s packaging is made from 100% recycled paper products and compostable bio-based materials. It also opened LA’s first sustainable sewing factory, powered by energy from renewable sources, and requires cleaning supplies and coffee to meet its environmental standards.

In 2018, Reformation’s annual sustainability report showed that 79% of its clothes were made in Los Angeles, including 22% in its own factories. Meanwhile, 19% was made in China, with the rest in France, Italy, Morocco, Thailand and Turkey.

Reformation says it requires its suppliers to meet a rigorous screening process and international standards on working practices.

Customers can also offset their carbon and the company has a tool that tracks the environmental savings of every purchase.

Publishing sustainability reports on its website every quarter can leave Reformation open to criticism, though. For instance, last year it aimed to have at least 75% of its factory workers in LA earning more than the city’s living wage of $14.25 (£10.60). It achieved just 22% but says it is now setting the minimum rate of pay – before bonuses and overtime – at this level.

Emily Salter, retail analyst at Global Data, says it has a premium brand image “so is popular among celebrities, persuading shoppers to purchase”.

“Its proposition is a unique blend of fashionability and sustainability so it is able to attract shoppers that are trying to purchase more sustainably and those who are not.”

The company is now expanding its overseas presence, helped by funds provided by private equity group Permira, which bought a majority stake earlier this year. Yael is said to retain a significant stake of an undisclosed size.

Reformation’s first outside funding came in 2015, with $12m from investors including model and entrepreneur Karlie Kloss. Two years later it received $25m from a number of other investors.

“We are focused on looking at all the major cities in Europe,” says Yael. “The goal is to have 75 stores in the next three to five years.”

It is all part of her mission to “bring sustainable fashion to everyone”. But that comes at a price – from £16 for a thong to £405 for a leather blazer.