Kolkata: Investment demand for gold, which had slipped by 35 per cent in the July-September quarter, may decline further in the fourth quarter of 2019 as rural India has stayed away from investing in gold after the kharif crop harvest. Investment demand for gold in rural India, which picks up every year after harvesting of the kharif crop, has plunged 50-60 per cent this year compared with a year ago.

Crop loss due to heavy and unseasonal rains this year has kept farmers away from gold purchases. Farmers are now buying gold only for wedding purposes, and the ticket sizes are small. Of the 850-900 tonnes of gold consumed annually in India, rural consumption accounts for nearly 60 per cent. 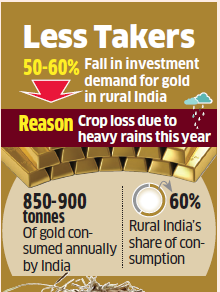 “There has been a huge crop loss in Madhya Pradesh, Maharashtra, Gujarat, Karnataka and Punjab due to heavy rains. Soyabean crop has been heavily damaged. As a result, farmers have not been able to buy gold they do every year after the kharif crop is harvested,” said Nitin Khandelwal, a jeweller based in Akola, Maharashtra. Investment demand has dropped in the third quarter of calendar 2019 by 35 per cent to 22.3 tonnes vis-à-vis the same period last year. Jewellers were expecting investment demand to improve after harvesting. “But nothing has happened; on the contrary, it has declined further,” he said.

High price has discouraged consumers, whether in rural or urban areas. Prices have risen 22 per cent since the beginning of this year. On December 1, it was Rs 31,368 per 10 gm. On Thursday, it was trading at Rs 38,324 per 10 gm in the spot market. “Rural demand alone has not gone down. The overall investment demand has gone down after Diwali and the festive season. The market is dull,” said Anantha Padmanabhan, chairman, All India Gem & Jewellery Domestic Council.

Less demand in the market is forcing bullion dealers to sell gold at a discount of $3 per troy ounce. “In the last week of November, there was no discount on gold as jewellers were stocking gold since price had come down to Rs 37,500 per 10 gm. But in the first week of December, price has again crossed the Rs 38,000-mark, denting demand,” said Mukesh Kothari, director, RiddiSiddhi Bullions.
[“source=economictimes”]